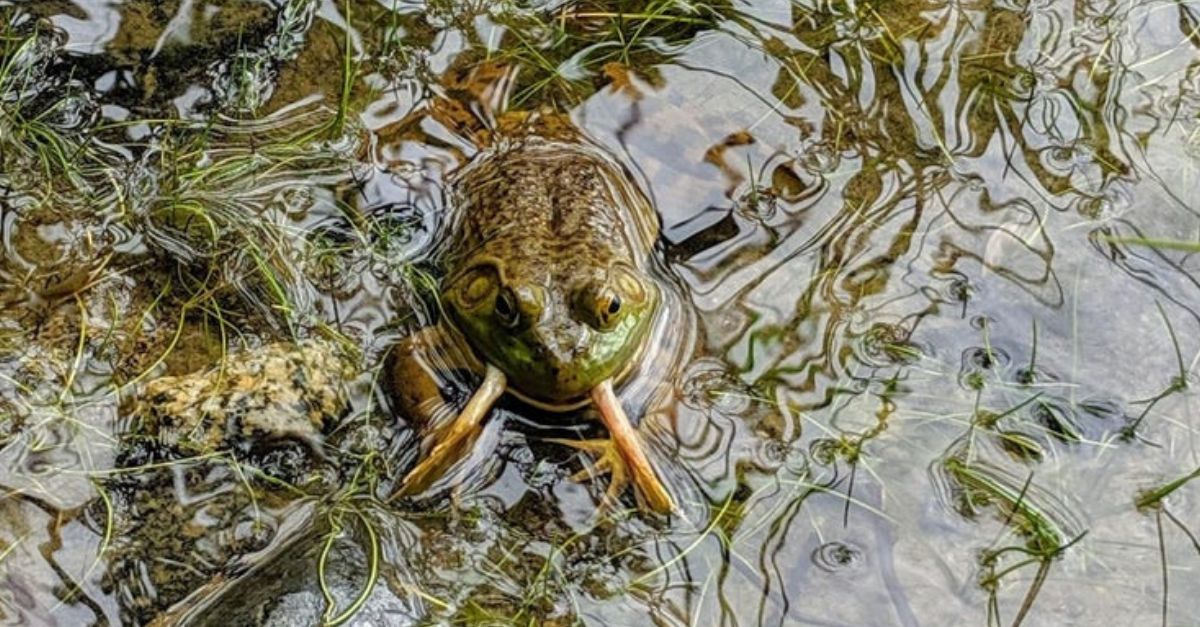 16+ Pics That Prove Nothing Is More Savage Than Nature

Considering how much we've built over the course of human existence, it's easy to get a little arrogant.

We may not be the only beings on this planet with opposable thumbs and the ability to use tools, but nobody else has found a way to pass on what they learned like us. Every day, we can look around and see what that combined knowledge has brought us.

And yet, if one of us were to wake up in front of a very angry tiger, one bet on who wins out in that encounter seems a lot safer than the other. There may be some people who could immediately react, but most of us would be out of the picture before we even realized what just happened to us.

Because as we're about to see, what animals lack in written language, they more than make for in sharp instinct and the will to survive.

1. Praying mantises can freak some people out, but they'd be a welcome sight compared to this fellow. 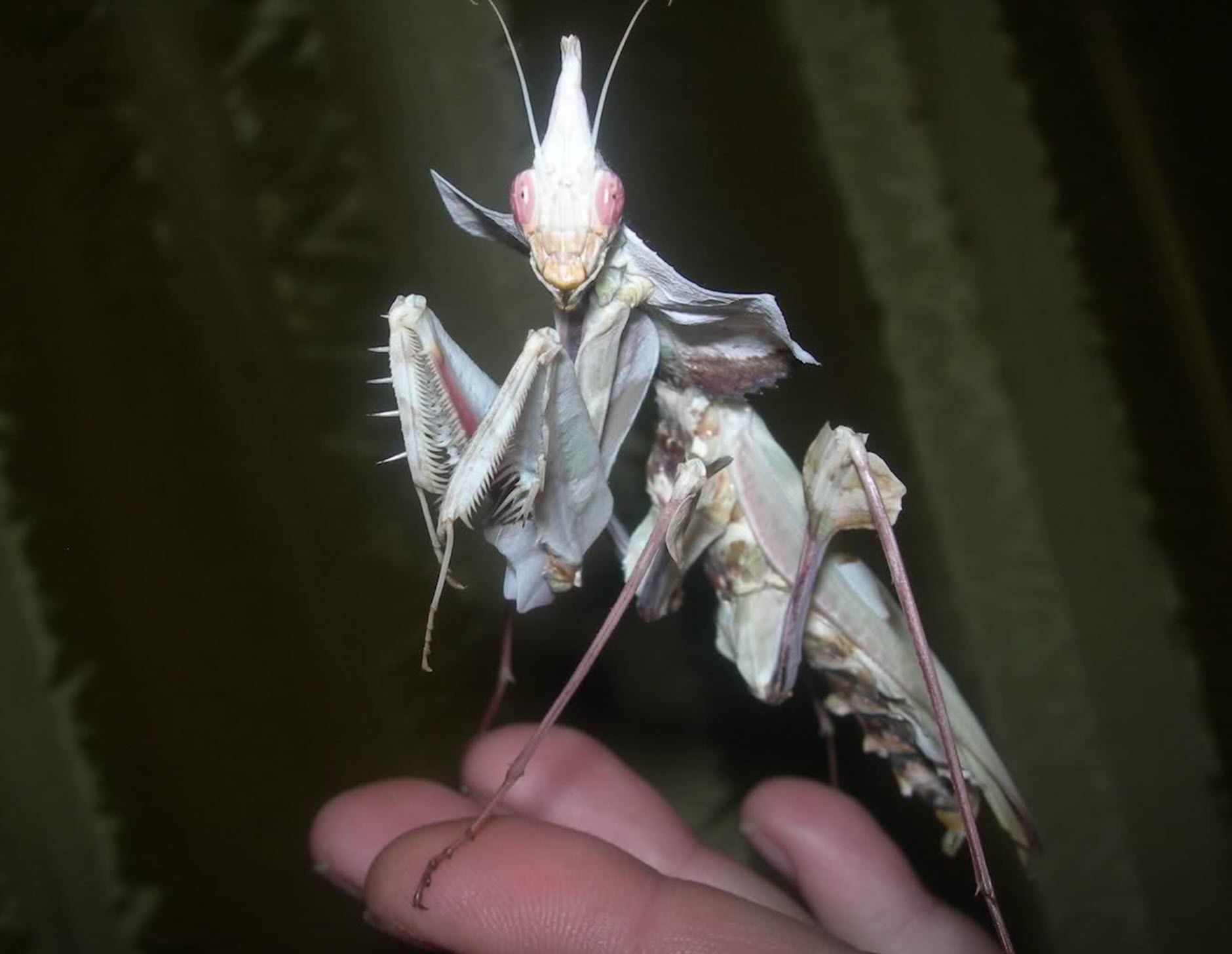 Here we see the Idolomantis diabolica, which is also known as the devil's flower mantis. Just by appearance, it seems to earn that name.

2. There are bigger snakes out there than the Indian Boa, but it seems more than big enough for us. 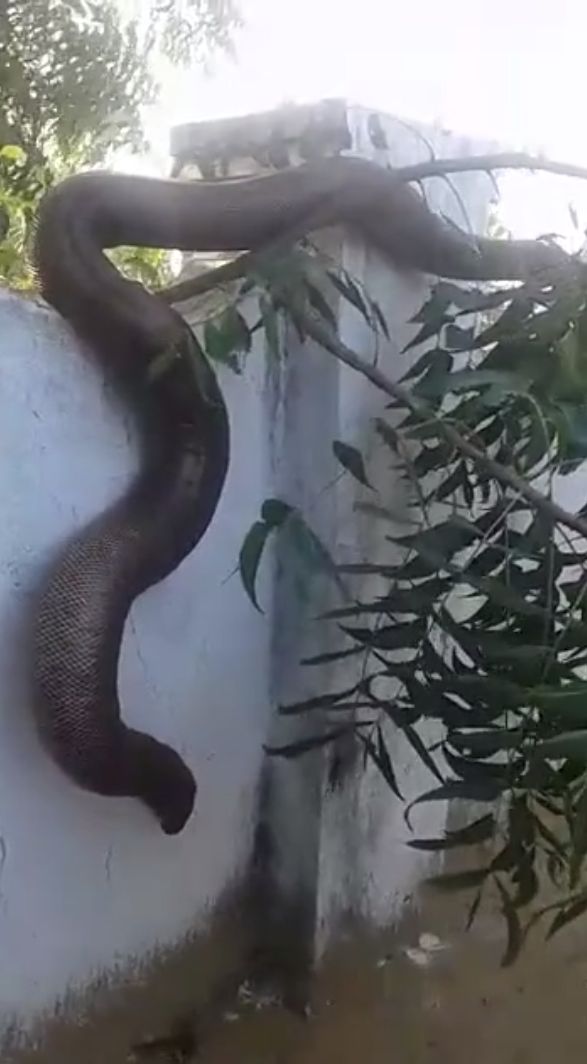 While a lot of constrictors can potentially pose a threat to us, it's hard to imagine even being able to keep your footing if this thing wraps around you.

3. This wasp may like the grasshopper it's laying on, but it's got a strange way of showing it and the feeling definitely wasn't mutual. 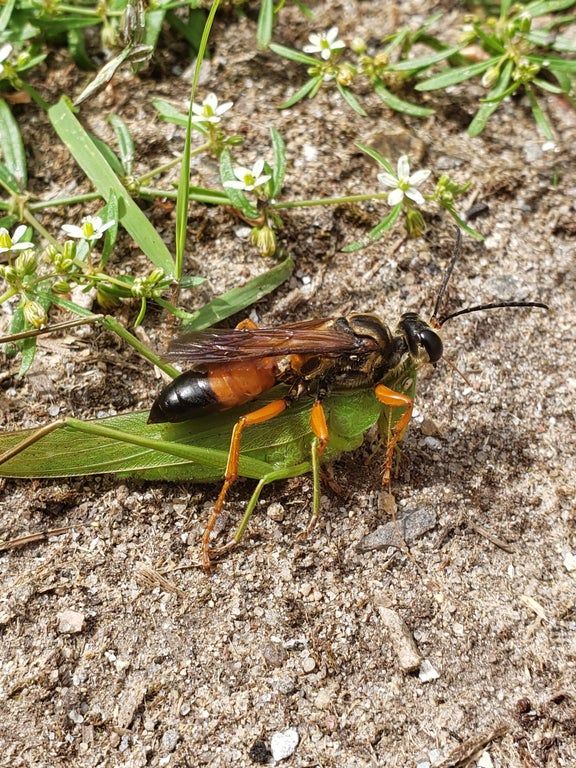 It may be relaxing on top of the grasshopper now, but the wasp is only able to do that because it just killed it.

4. We may see squirrels as harmless little cuties who just munch on nuts and vegetables, but there's a little more to it than that. 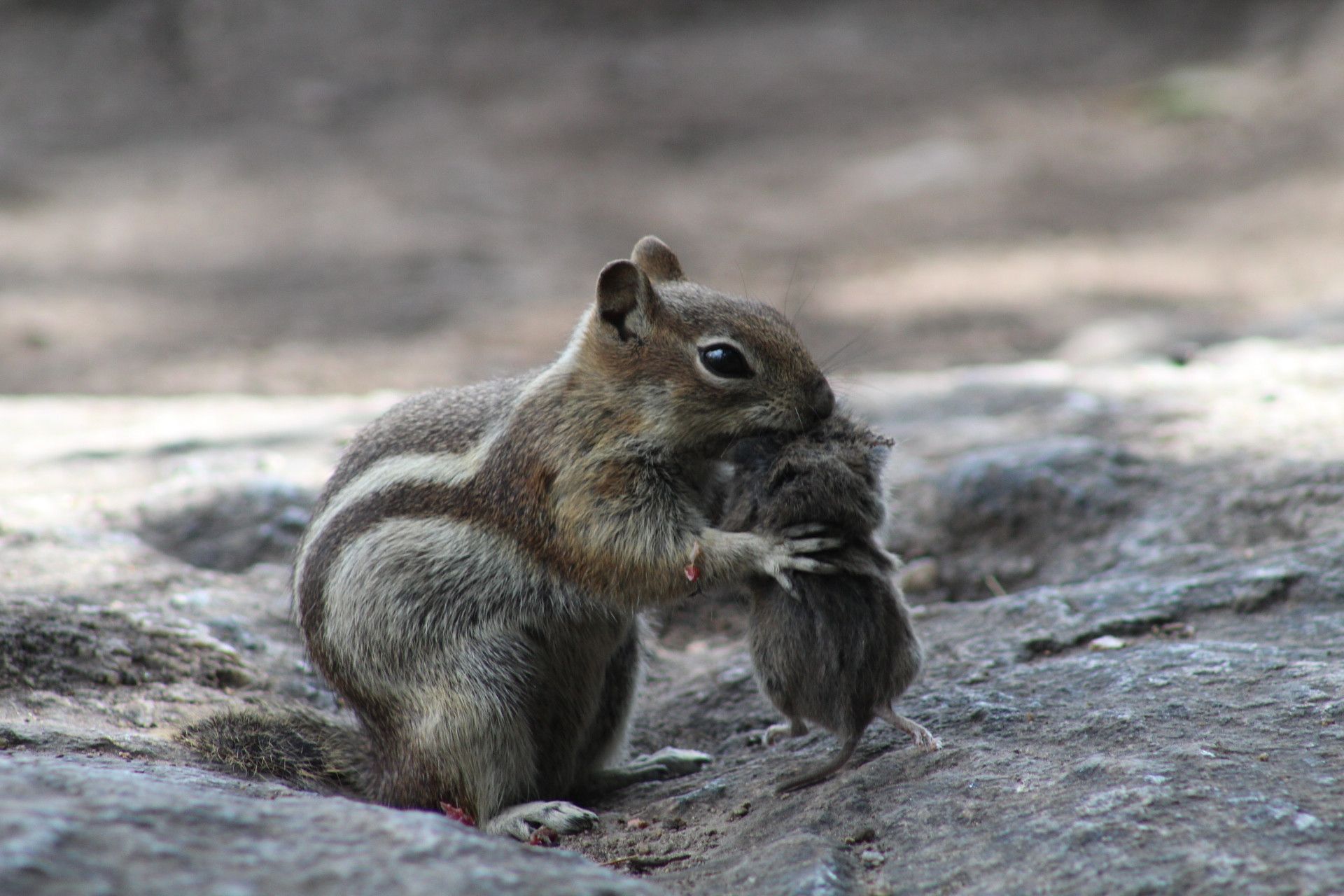 This ground squirrel is small enough to seem like a chipmunk, but that obviously doesn't stop it from making a full meal out of this mouse.

5. When a seal and a shark go to war, the winner isn't always what you might expect. 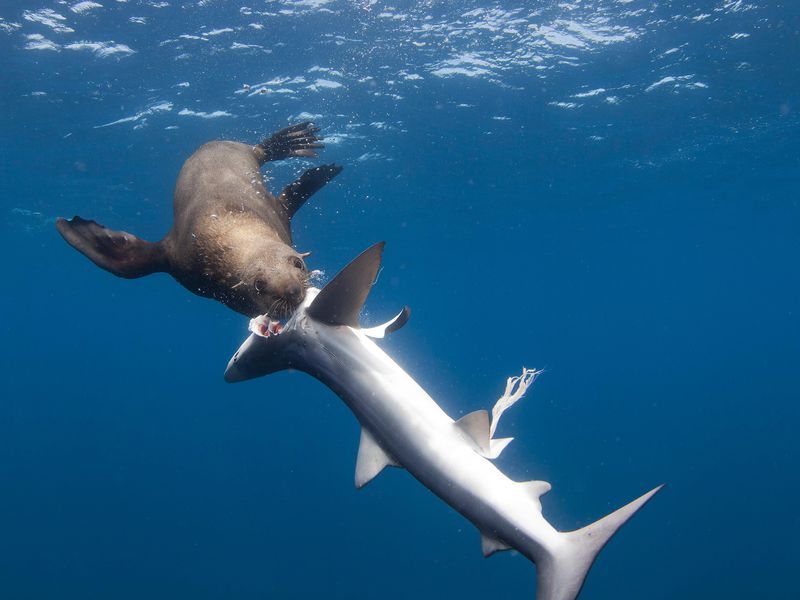 It only takes one big bite in the right place to shut the whole show down, and the seal managed to lock it down and emerge victorious.

6. Cacti might be a water-efficient, if prickly, decoration to us, but this one proved more than just painful for these bats. 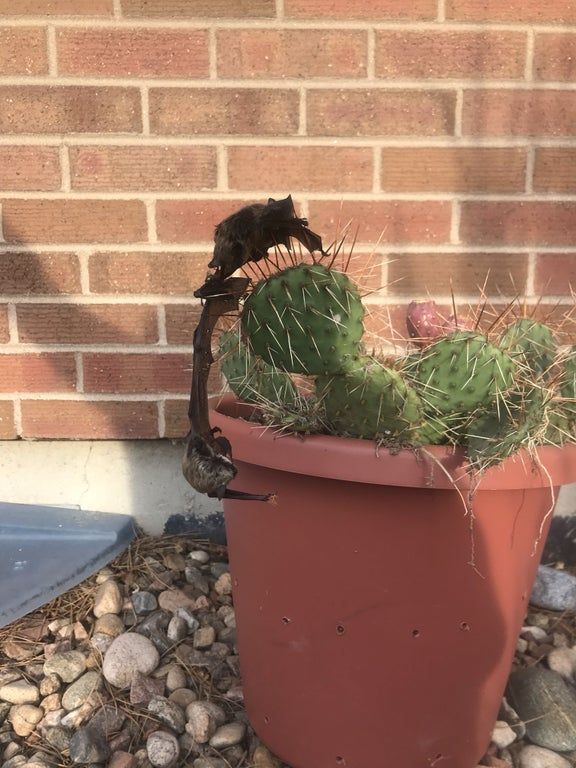 As for how the bats ended up in this situation at all, the likely answer is that they were enticed by bugs crawling around this cactus and never survived to enjoy them.

7. If you're picking up rotting fruit for your compost heap, this is why you should do it as carefully as possible. 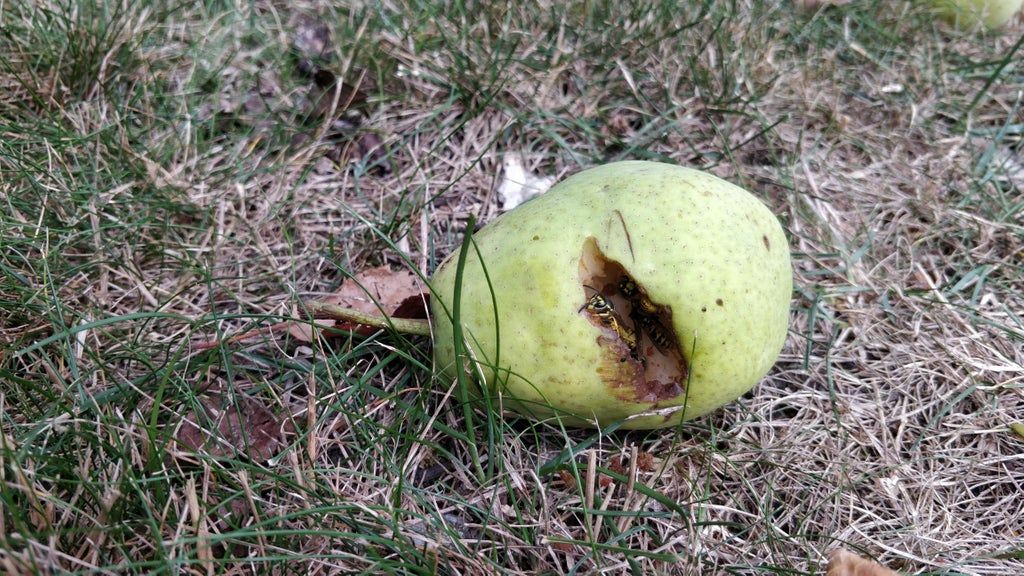 Yeah, it turns out you're not the only one who might still have a use for this. And it seems almost impossible to avoid getting stung by this thing after a surprise like this.

8. The False Bay near Cape Town, South Africa used to be full of Great White Sharks, but they're all gone now. 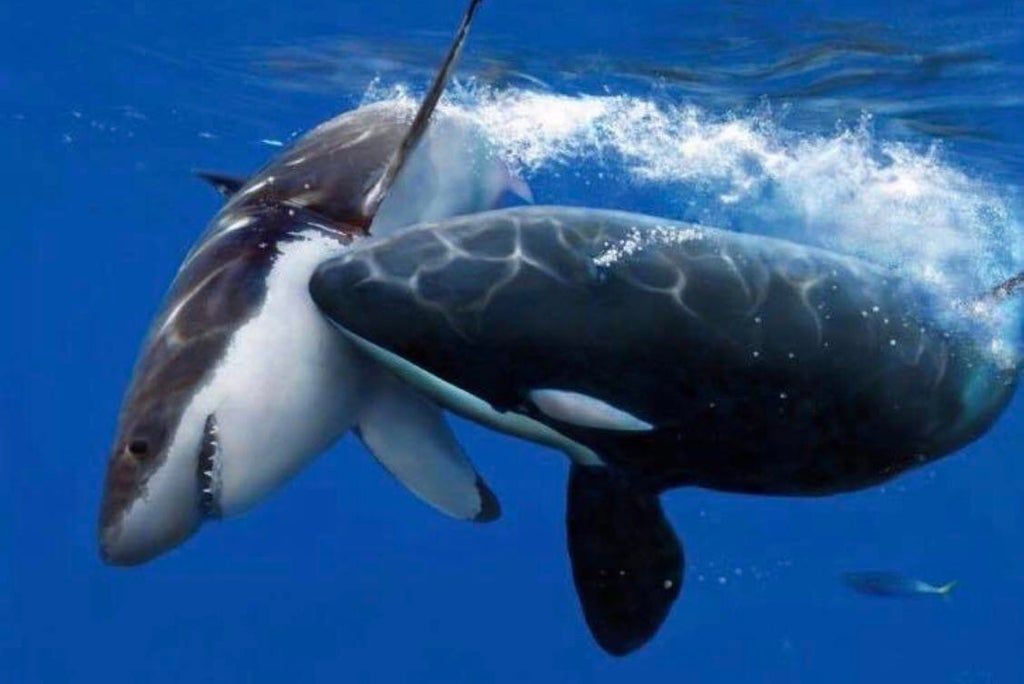 While it's still a mystery as to what caused this, the most likely answer is that killer whales have recently become so good at eating them that they've driven them all away.

9. It may not be very unusual to see a bear eating a salmon, but the way it caught this one is pretty incredible. 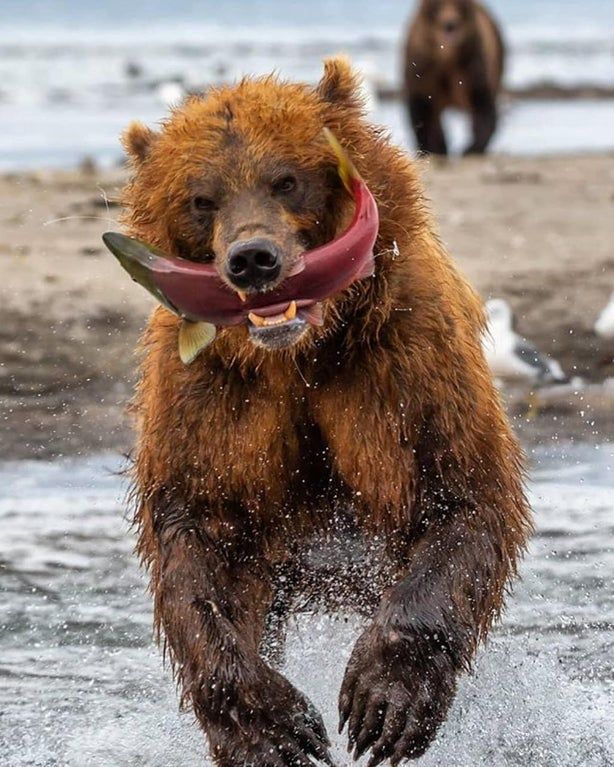 Not only does it look incredibly intense as it catches the fish in its mouth mid-jump, but the fact that it's able to do that at all is marvelous.

10. This snake clearly got the jump on this frog, but the most interesting thing about this scene is the frog's reaction. 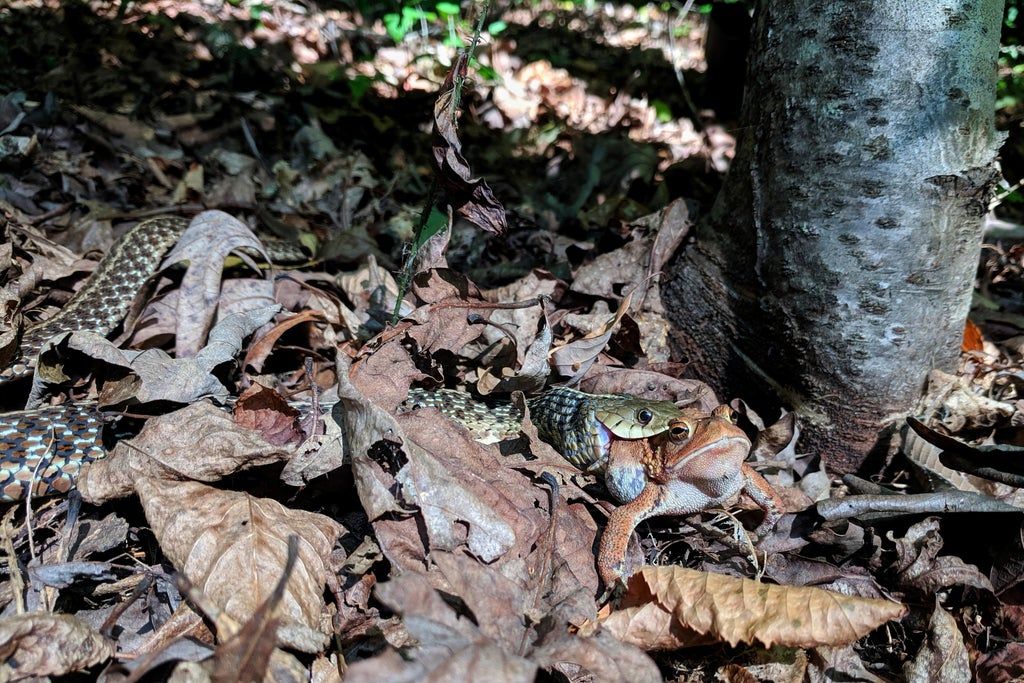 While a lot of animals would still futilely attempt to struggle out of this situation, the frog seems resigned to its fate.

It doesn't even look bothered by its impending doom.

11. To a lot of people, the work of cracking open a crab shell is worth it for the meat inside. Apparently, we're not so different from spiders that way. 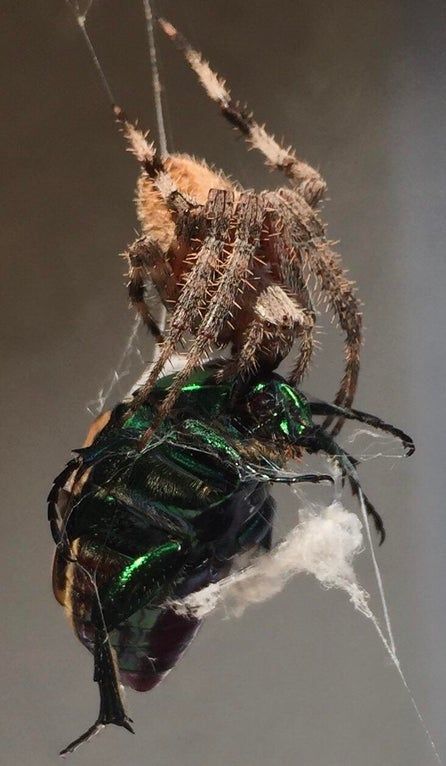 This beetle looks like it has some tough armor to get through, but this spider definitely seems up to the challenge.

After all, it's not like the beetle can really go anywhere.

12. The perspective makes it a little tough to tell what's going on at first, but reading the facial expressions should make it a little clearer. 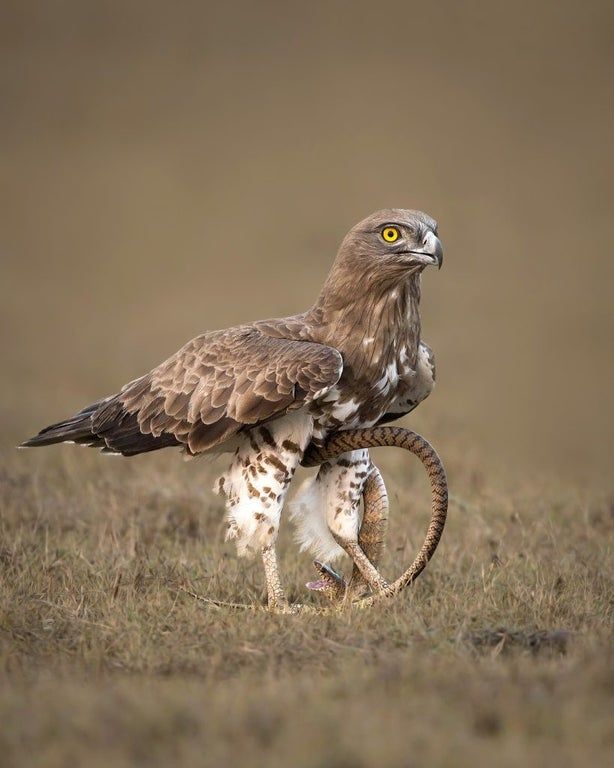 The short-toed snake eagle certainly has a piercing stare as it demonstrates how it got its name, but the snake it's stepping on looks understandably panicked about this ordeal.

13. You may have heard that female praying mantises will bite the heads off of males after they mate, but here's the aftermath of that encounter. 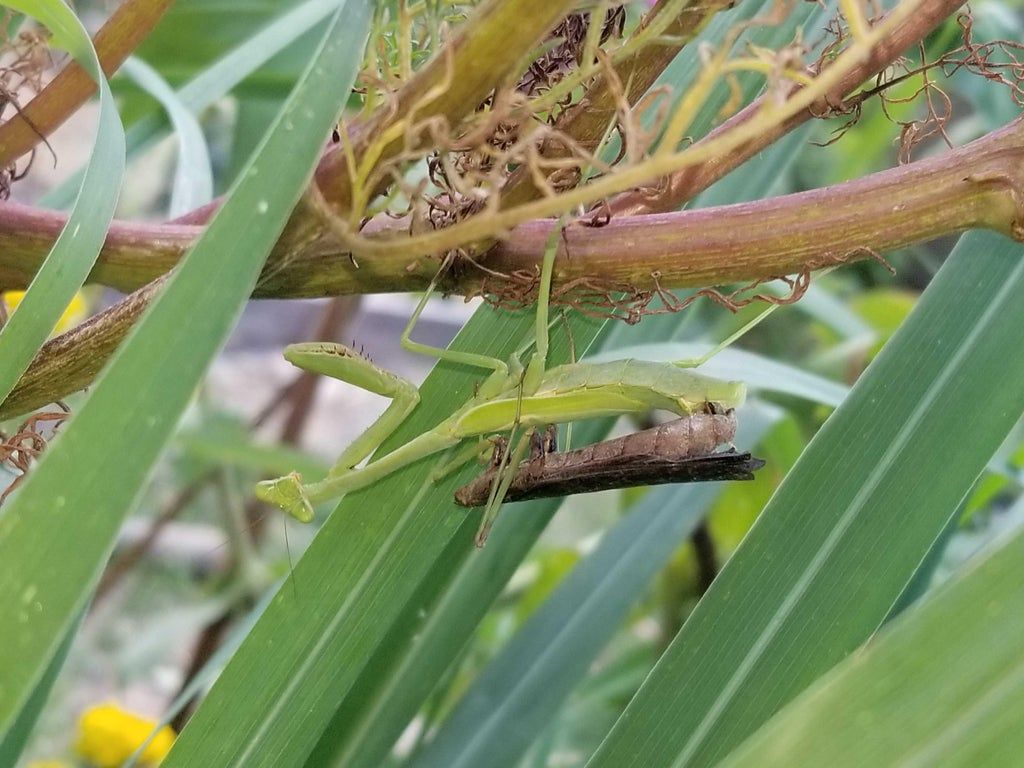 She seems pretty satisfied with how things went, whereas her now former mate looks more like a discarded cigar than an insect.

14. While we mostly picture spiders as eating bugs and other spiders, their diet is a little more diverse than that. 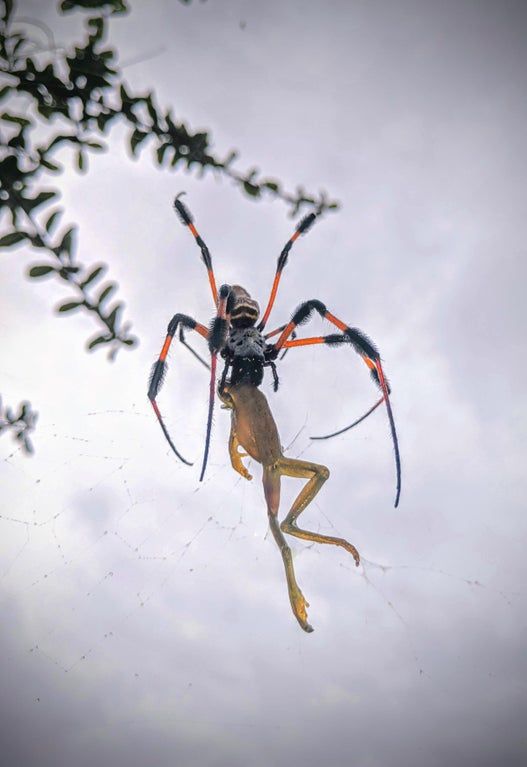 As spiders go, the Golden Silk Orb Weaver already looks pretty intimidating before we catch a glimpse of it chowing down on an entire tree frog.

15. Just because we've seen some sharks on the losing end of battles today, that doesn't mean they can't earn their fearsome reputation. 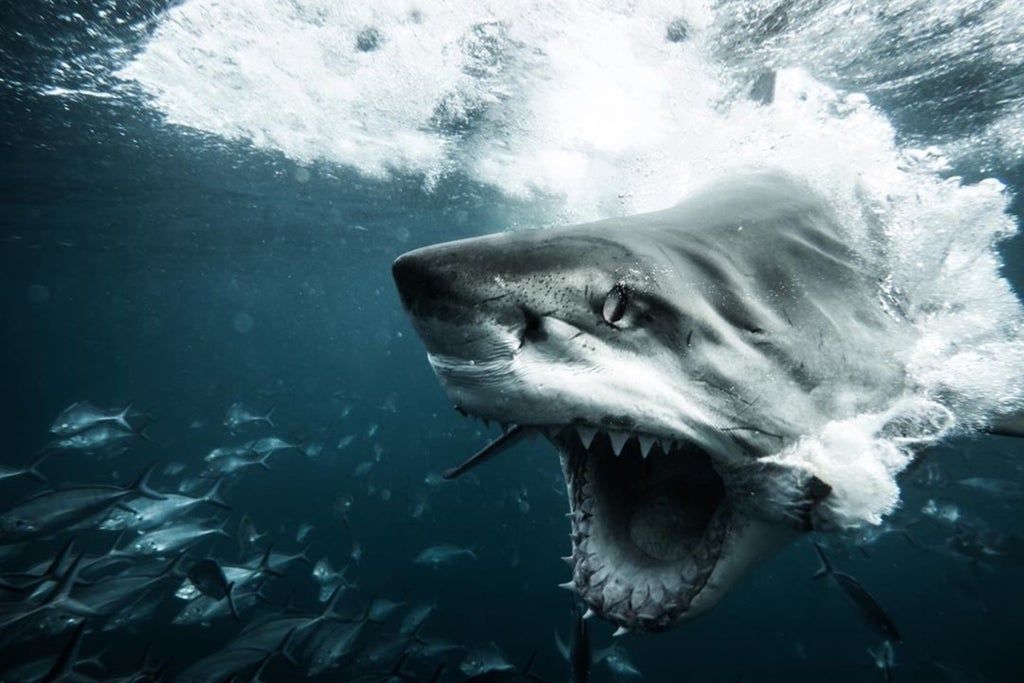 When the Great White swims up to you with this intense look on its face, it suddenly becomes a lot harder to remember what fur seals and killer whales can do to it.

16. Seagulls are definitely the scourges of our ice cream cones and fries, but they're less "annoying" and more "terrifying" for other creatures. 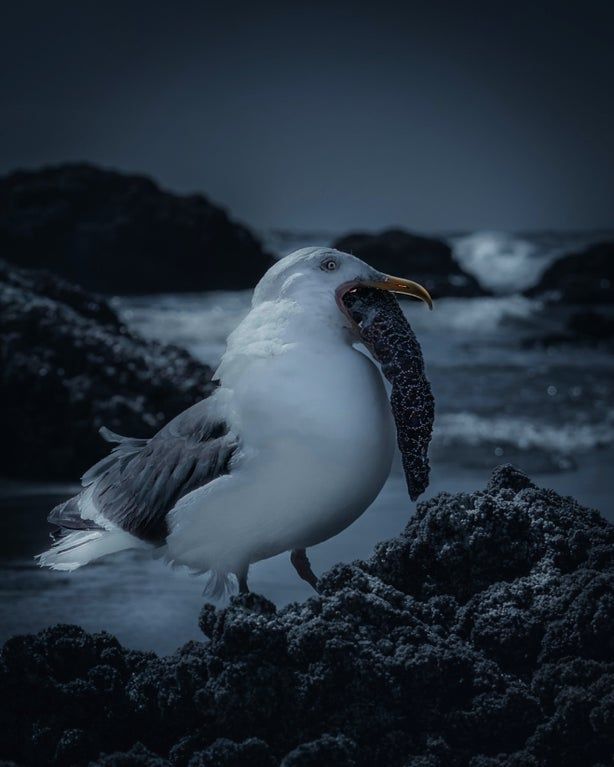 For instance, this big piece that it's slurping up like like pasta is either a whole starfish appendage or an entire sea slug.

17. No matter how dopey they look, hippos are absolutely not to be messed with. 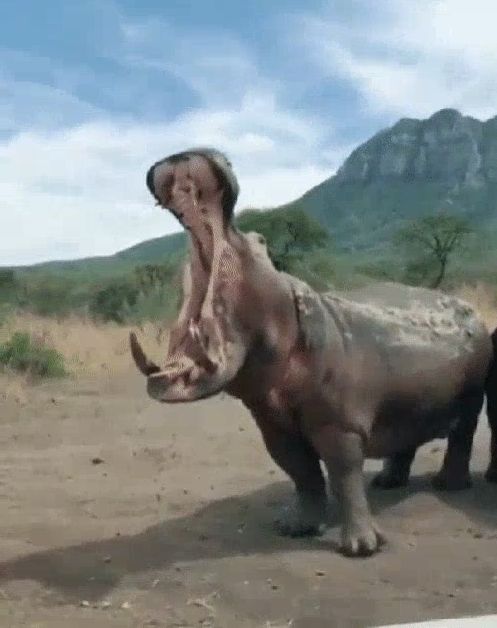 If see one do this up close, you better hope it's yawning because otherwise, there's a very good chance it's fixing to crush you between those powerful jaws.

18. It's pretty hard to tell what this frog is eating just by looking at it, but it's clearly got something unusual in its mouth. 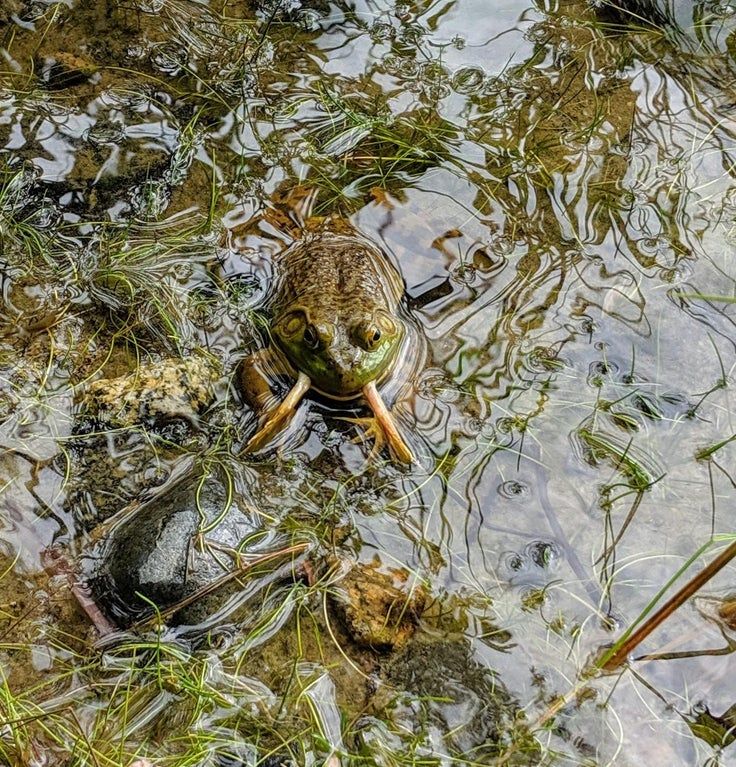 And it turns out that this unusual thing is another frog and it's far enough into its meal that we can only see the tips of its lunch's legs.

19. Although this snake was one of the casualties of this forest fire, it somehow ended up memorializing its own final moments. 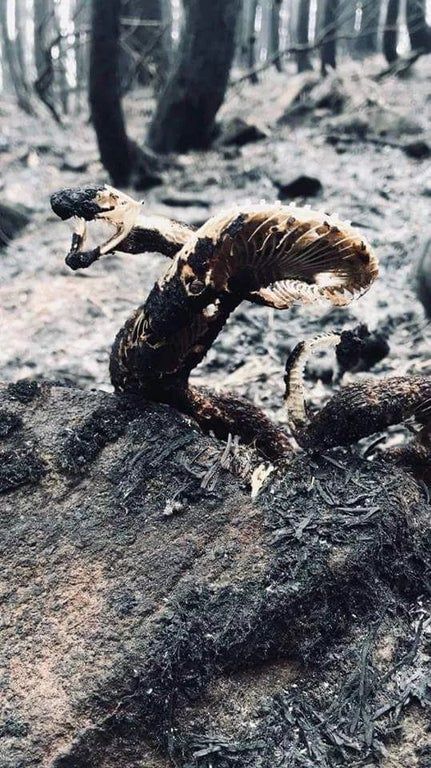 And considering how defiant it seems to be facing such certain doom, even a sculptor would have trouble finding a better way to express how badass this snake was.

20. This striped marlin managed to catch dinner and dessert all at the same time. 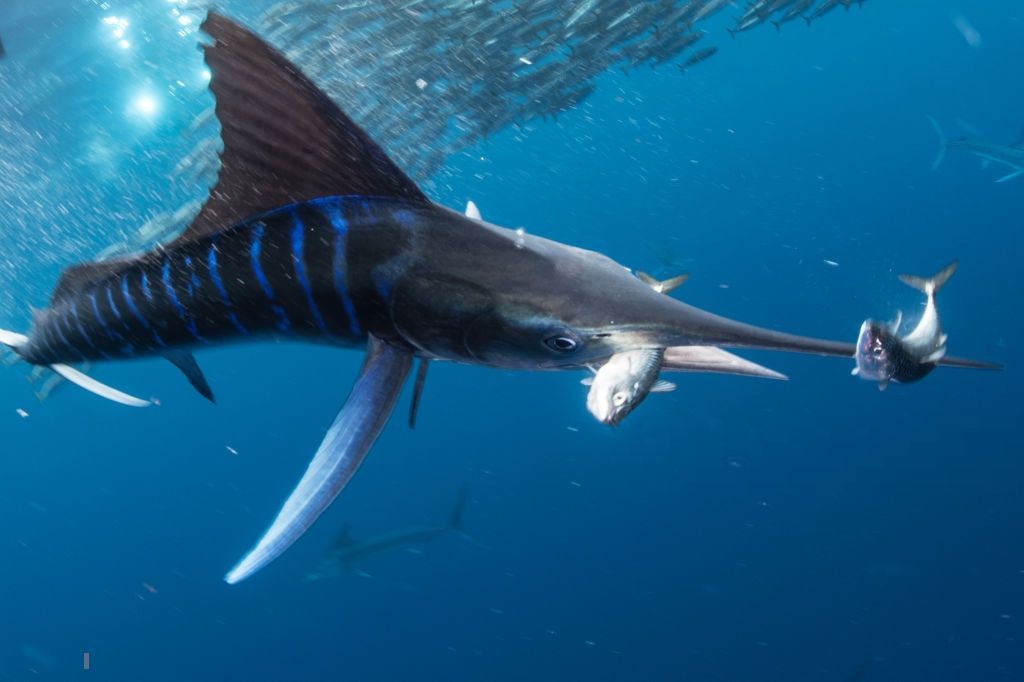 It's always nice to have something packed for when you get hungry again, even if that means it's now attached to your nose.