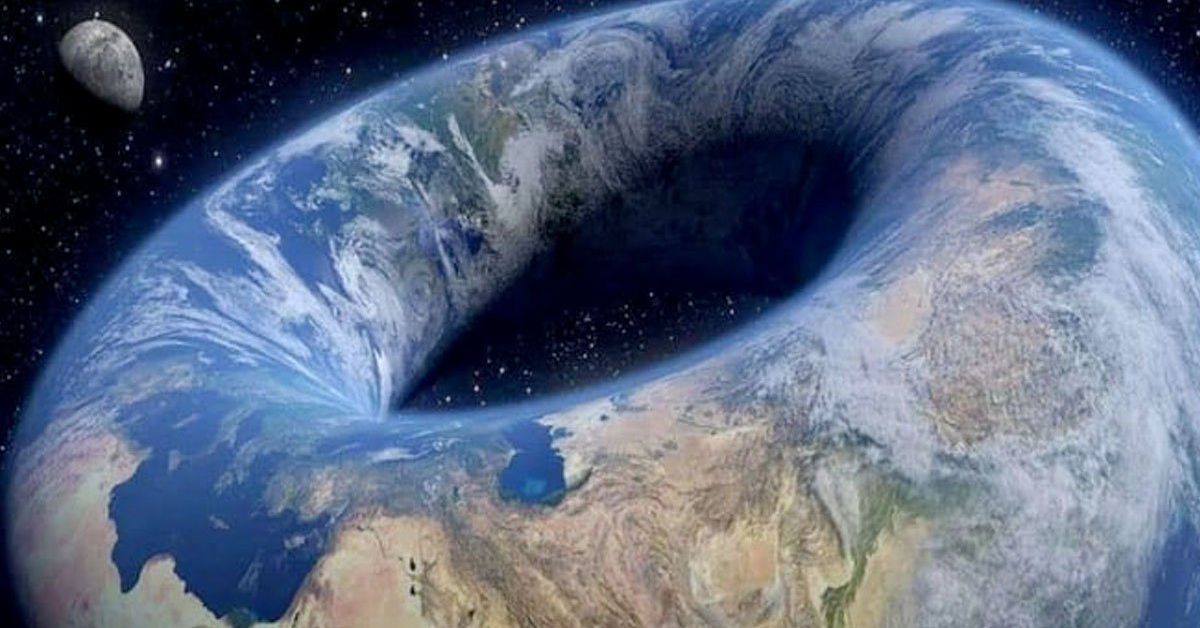 If you're looking to clear out a few friends or find some empty seats at the movie theater, there's no better tactic than bringing up flat earth theory.

It is the idea that the planet we live on isn't as round and ball-like as it may seem from photos, TV, film, and numerous other places. It's actually a flat world that is surrounded by Antarctica as a Game Of Thrones style ice wall keeping the disc earth together.

There's a lot more than that and people have devoted their lives to it, so we're not going to cover everything. But there is an interesting new theory to bite into.

Not So Flat Now

The rise of YouTube, social media, and the internet, in general, has given Flat Earthers a chance to revive their thoughts and give the theory some new life -- and new layers all the time.

Much like the ancient and classical eras saw people come up with their theories about the Earth's shape, modern theories have many different avenues they travel. The latest seems to be the doughnut Earth according to LAD Bible:

The theory was posed on a Flat Earth Society discussion board by pioneering member, Varaug, who said: "I have a theory that the Earth is in fact shaped like a torus (a doughnut shape). However, light is curved so we cannot tell."

How A Doughnut Earth Works

How does the doughnut version Earth work? Or Torus Earth as the message board theory pushes during its handy FAQ. Here is a taste:

Q1. Why has the hole in the centre of the torus not been discovered?

A. Light bends and follows the curvature of the torus, making the hole "unseeable."

Q2. If light is curved so that we can't tell, then why would anyone suspect that the earth is shaped like a torus?

A. Logically, it is possible for a torus-shaped planet to form (see Q6), so we cannot rule out the possibility that the Earth is shaped like a torus, and therefore the hypothesis must be considered as a potential model.

Q6. Why have no Arctic explorers "fallen" into the hole?

Q8. How do we have seasons?

A. In the same way that the RE does. The Earth does not follow a perfectly circular orbit, it is slightly elliptical. Also, the ellipse is slightly shifted so that one of the shorter edges is closer to the Sun than the opposite edge. Over 1 year, it completes one orbit. Say the Earth starts on the short side closest to the Sun. This is summer (the hottest season for obvious reasons). 3 months later (one quarter of an orbit) it goes to one of the longer sides, and is slightly further away, entering autumn. Another 3 months and it is at the point where it is furthest away, in the middle of winter. Another 3 months and it's a bit closer and we're in spring. A further 3 months and we're back where we started!

But don't think that a doughnut Earth is the only type of Earth out there. The regular flat Earth theory has sparked plenty of debate over the years, with the oddest being the existence of a concave Earth:

This is the opposite of the equally strange hollow Earth theories out there where it is said that humanity lives on the inside of a convex planet with the universe at its core and the interior of the planet is all outside.

What About A Hollow Earth?

A concave Earth is only one piece of the hollow Earth theory, including thoughts on UFOs coming from inside the planet, lizard people waiting to reclaim the surface world, Bigfoot and other creatures emerging from below the surface, and even another Sun inside the Earth's core.

The main idea is that there is room in there for pretty much anything we can think of, and it stretches back to ancient times. Hell, Heaven, the Underworld, honeycomb loving subterranean civilizations, Nazis, and much more have inhabited the hollow Earth.

It is not the only hollow thing out there, though.

And Then There's A Hollow Moon

Some also believe that the Moon is hollow and acts as a sort of space station or artificial body for alien species. It is more of a fringe theory held on by conspiracy theorists and speakers like David Icke, but numerous claims have been debunked time and time again.

Modern science supports a solid core to the Moon, but many had tried to claim that the satellite is less dense than Earth in the past, that it rang like a bell when Apollo 12 caused a deliberate crash on the surface, and that meteors are actually hitting a metal hull beneath the crust when they're making all those craters.

It's all been debunked by scientists over the years, but it is a theory that is still out there in some circles.

There are plenty of folks who believe in flat Earth theory, with Kyrie Irving of the Boston Celtics possibly being the most high-profile of the bunch. His comments in 2017 made headlines and created conversation, leading to some regret near the end of 2018 when he was asked about his "flat" beliefs:

"To all the science teachers, everybody coming up to me like, `You know I've got to reteach my whole curriculum?' I'm sorry," Irving said, as the room attending his session laughed. "I apologize. I apologize."

Other names that have noted they believe are the rapper B.oB., MySpace personality Tila Tequila, and '80s musician Thomas Dolby -- though he doesn't actually believe, he's just an honorary member in the Flat Earth Society.

What Does Science Have To Say?

So what do scientists think about a theory that claims gravity is an illusion and that the horizon is always at the same level? Well, most consider it all a conspiracy theory and without much merit when put up against facts. Neil deGrasse Tyson put it in the simplest terms during an episode of his StarTalk podcast according to LiveScience:

"So, tell me, Neil, is the Earth flat?" Nice said to open the conversation.

"We have video from space of the rotating, spherical Earth. The Earth is round," was Tyson's laconic response...

"What's odd," Tyson continued, "is there are people who think that Earth is flat but recognize that the moon is round. Mercury, Venus, Mars, Jupiter, Saturn, Uranus, Neptune and the sun are all spheres. But Earth is flat ... something doesn't square here."

Tyson explained that because of the laws of physics and the way energy works, the universe "favors the sphere" when forming planets and other bodies. Sometimes, a sphere might be distorted because it's rotating very fast. But almost everything in the universe, he added, is spherical or almost spherical.

What Do You Believe? 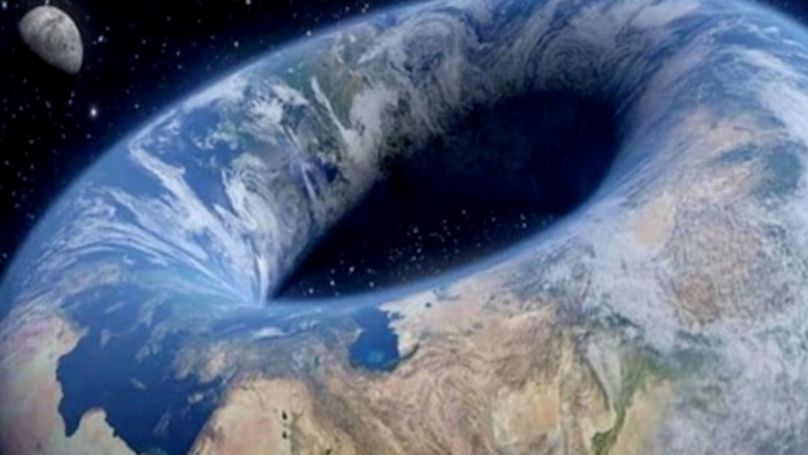 What do you believe? Or better yet, what do you want to believe? Do conspiracy theories and massive ideas like flat or doughnut-shaped planets keep you going? Is it a true thought or just a fun pastime you take part in because you don't want to face the real world?

If you take a flight, do you feel like you're being fed an illusion out of your window or are you more worried about the food being served on the flight?

These are the big questions.

Battling Back Against Conspiracy The latest news on the Flat Earth front -- and all conspiracy theories -- is that YouTube is changing their algorithm to battle back against conspiracy videos being recommended to users after their video ends.

YouTube and Facebook have gotten the brunt of the criticism for their role in spreading conspiracy theories to the mainstream.

Look Behind The AI

Guillaume Chaslot shared his work on the AI behind YouTube and how it worked, delivering an interesting thread with how it got to this point and what needs to change going forward.

Will this end the role of conspiracy theories in the public eye? No way. Not a chance. The internet is still there and people are still willing to stir the pot in order to make life seem more interesting than it is.

Plus you can't ignore the other avenues people have to share this information. Twitter is still wide open, blogs can pop up anywhere and appear as part of a search. And YouTube isn't the only video show in town.

So yeah, good on YouTube. But this is one ship that will keep on sailing until it reaches the edge and falls off. Or loops around into the center of the donut. Or breaks through to the hollow core to be sacrificed to the giant turtle and its lizard men.